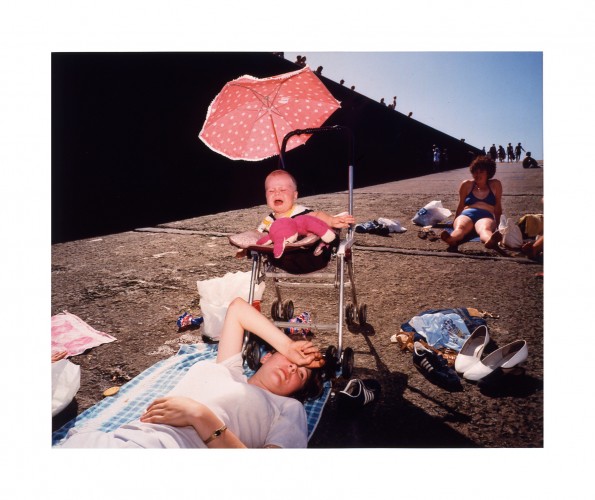 Martin Parr is a British photographer and has been a member of the photographic cooperative Magnum Photos since 1994. Since finishing his studies, he has worked on a number of different photography projects: a series on the town of Boring in the United States and subjects varying from tourism to malnutrition.His particular view of reality, imbued with humour and irony, gives his photos an original charm and distinct style. Parr has a refreshing take on the documentary genre  as he endeavours to capture as closely as possible the banality, boredom and lack of meaning that he perceives in society. His photographs also have a more serious social realism, as precious testimony to the Thatcherite era.  Nothing escapes his lucid and critical gaze, neither consumer society, nor mass tourism, nor the absence of spirituality in contemporary Western societies. Although his work primarily falls into the category of documentary photography he has recently opened up to other themes such as fashion and advertising, and developed an interest in cinema and filmmaking.

The series Last Resort, from which the photographs displayed here come, was shot from 1984 to 1985 and is a chronicle of the residents of English industrial towns and cities on their summer holidays in Blackpool. Martin Parr offers here an incisive sociological critique of mass tourism in its simple banality. The images taken on the spot have a cold aesthetic: large formats, acid colours, simple compositions and direct framing. With a distinctly British sense of tongue in cheek, Parr abandons the usual medium of photojournalism (i.e. the Press) and instead exhibits his photos in galleries and art centers, thus placing his work somewhere between social and fine art photography. This is an attitude which became more popular in the 1990s, when the systematic use of close-ups to show surrounding detail resulted in increasingly abstract images.