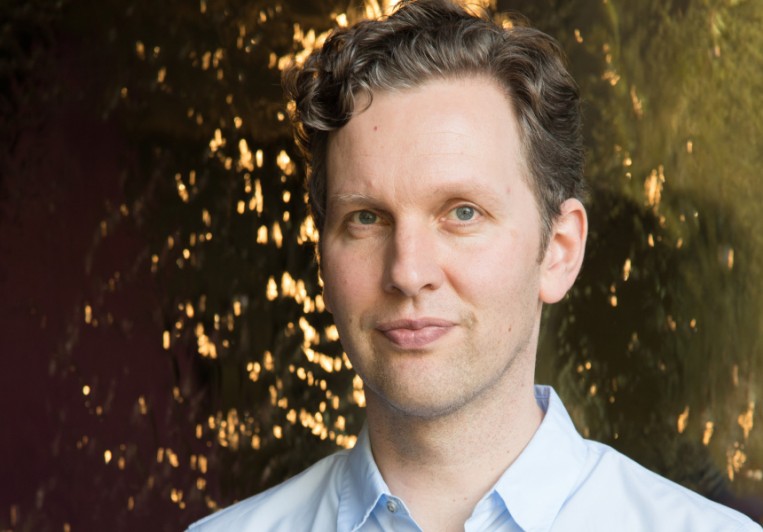 Drawings, photos and sculptures are all linked by Shrigley’s trademark dark humour that makes him such an incisive commentator on modern life. He notably uses religious allegory in his critique of social media through a series of mischievous meditations. ‘What Decay looks like’ (2001) suggests a major theme in Shrigley’s work: decay. The oversized decaying molar, looking at itself in the mirror reflects the pain of a toothache which can become an obsessive self-centred monomania for the sufferer: « My tooth hurts, therefore I am a tooth». This sculpture of a hole-ridden tooth is emblematic of the pathos constantly present in Shrigley’s work. Nothing is insignificant, everything merits reflection. Shrigley’s world is therefore one in which absurdity is the order of the day and where our complexes and neuroses take on monstrous, and occasionally grotesque, proportions.

THE TOOTH: Who am I then, all alone, looking into this giant mirror? A sculpture? An installation? Some sort of three-dimensional drawing? Am I figurative, abstract, symbolic or allegorical? Comic? Tragic? Doubt overwhelms me. …. THE REFLECTION – Let’s put a stop to this endless identification, we are all everything all at once. We might as well just accept our fate, this cursed figurative formalisation that places us in a kind of troubled alliance between seduction and unease, between homage to contemporary sculpture (Tony Cragg) and pop art, comics and Vanity. Esoteric and burlesque all at once, we play characters in an unlikely scene, fantastical and childlike, almost regressive, something from a dream or cartoon. A three-dimensional absurdity, out of step with the messy form of the drawings that make up the bulk of our creator’s work... Alas, this incoherence abolishes any certainty or comfort we had with regards to our purpose. No matter: we will remain disturbingly sharp and suspiciously white, vaguely playful but certainly not reassuring. For we represent the anti-design. We are a work of art.

SCENE I (interior, daytime): a giant tooth covered in holes is on the ground in front of a large mirror. Dialogue.

SCENE II (a dream perhaps): THE TOOTH – Work of art? I feel desolate, like an organ without a body, torn out of the living. Misery and contrition….. the impossibility of any integrity for the removed part….THE REFLECTION – Exactly. Such is the mysterious ontology of any element organic or mineral: alive yet dead, inert yet changing, both matter and yet still an autonomous body. We are like many of the amputated organs and strange fusions of species that populate the work of our creator: a stuffed squirrel on a tree trunk with its head between its legs, faces in pebbles, a horse’s hoof perforated with screws, a jar of nail clippings, a lettuce leaf made of cloth, an abandoned diary etc. So many remnants of excision, amputation, erosion, that become reconstituted, fictionalized, even openly fake, lying somewhere between medical prosthestics and theatrical props. We ourselves, the reflected tooth, reside emblematically at the boundary between the living organ and the dead thing, thus at the critical boundary between subject and object. This is certainly the cause of our troubles: this search for an untraceable identity of the residue of the excision, of the shred, of the scrap of human separated from his body. In this sense, too, we are a work of art.

SCENE III ( A comedy of errors): THE MIRROR (intervening) – (an aside to the audience) - It’s a drama alright we’re watching, the self-realisation of the orphaned organ. (To the tooth) Uncertain object, only I can name you. For I represent the reflexivity of the inverted world but also the constitutive image of the self. That Lacanian "mirror stage", that is to say: the primitive identification of the being in front of his reflection.  Ah, the magnificent and fundamental paradox of an integrity revealed by the inverted image, which "situates the instance of the self, from before its social determination, in a line of fiction". I am this reflexive fiction, consciousness through illusion, psychoanalytical conscientization of the "I" extended to the object, playing the polysemy of the verb "to reflect". Basic object anthropomorphism? But don't you see rather that what I am illuminating in this way is the fundamental question of the autonomy of the artistic object. An object considered as self-referential, reflexive, insubordinate to other logics than that of its own existence! THE TOOTH- Oh!

Scene IV (Storm): THE TOOTH - (hesitantly) - But... by injecting consciousness, and therefore life, into the object in this way, do we not also immediately launch the long race to death? THE REFLECTION – (chuckling) AHAH! Look at yourself. Let us not be taken in by your immaculate whiteness: there is most likely something rotting in your crown... This seems to confirm the title of our tragedy: it the decline, the irreducible withering away of the object that we are talking about. In terms of the beginning , I fear that we are already at the end. Already dead: already, it is only our decadence that can be observed, our decay that can be contemplated. An inescapable movement of corruption that never reverses: "Please do not return". And since the organ is "orthopaedic in its totality", what we are pointing to in a grating manner is the probable end of man. In other words: the death of art. THE TOOTH— Arrrgh…