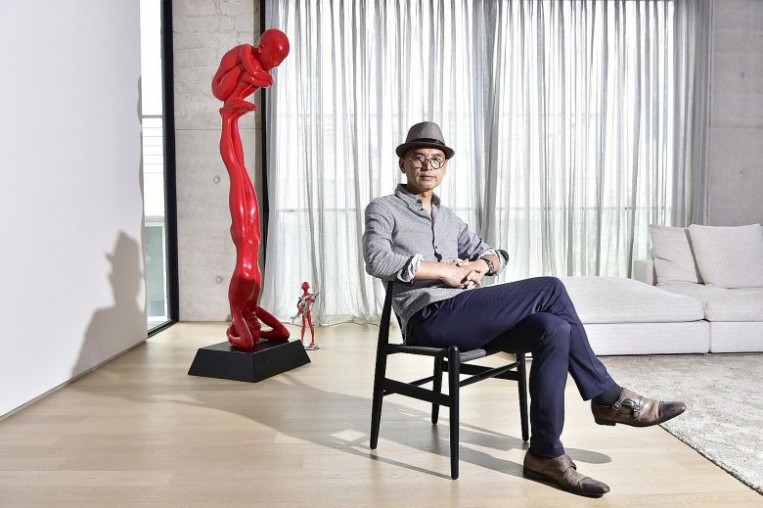 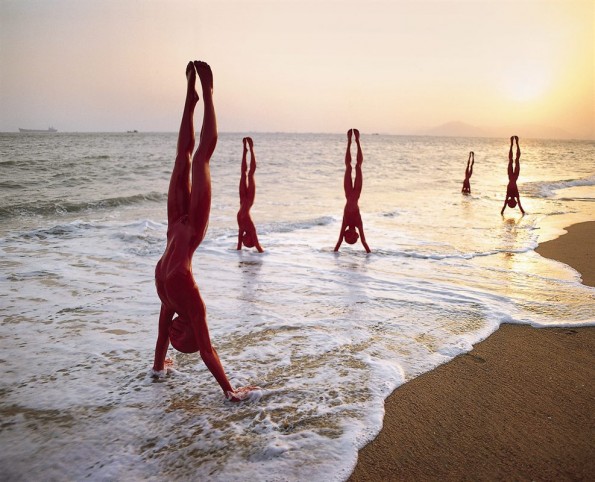 Chinese artist Chen Wenling, who has emerged as one of the most innovative and prominent sculptors of his generation, was born in 1969, in a mountain village in the Fujian province. His first artistic endeavours began within his family home where, as a small boy, he made his own toys and small clay figurines. He was admitted to the Xiamen School of Arts and Crafts to study traditional Chinese ink painting, and graduated with a degree in woodcarving. He began as a civil servant and then completed his studies as a sculptor at the Central Academy of Fine Arts in China. He finally settled in Beijing in 2004.

His artistic career has been interwoven with successes and failures, and certain challenges led him to reflect upon the objective of a work of art, how it interacts with its environment, and how it relates to the viewer, as well as the artist’s purpose in society.

His increasingly large-scale works aim to express his ideas about these themes. He combines sculptures, installations, videos, photos, and performance art, establishing a highly original and constantly evolving vision. His work is both visual and conceptual. His artistic education was cut short and, in his eyes, remains incomplete, and his self-taught style distances him from formatted aesthetic codes. His rural origins, away from the big cities, the art scholars, and the celebrated figures of the famous academies made him open to other approaches. Above all, his art was a way of creating a universal link - not primarily with a refined elite, but with the greatest number of people possible, of all social classes, from the scholar to the peasant.

Through symbols, colours and recurring themes, he succeeded in giving a new face to contemporary China and its upheavals. The Western eye can judge with less understanding the content of his historical referents, the significance of these symbols, both ancient and modern, which seem so familiar to the Chinese world.

His favorite figure, the main character that he frequently portrays in his work, is the pig, who becomes a messenger of the artist’s questions. Its image is powerfully rooted in popular and domestic culture, and festivals and houses alike abound with its representation.

The reason why the pig came to mean home, household or family can be explained by looking back in history. Pigs were considered to be intelligent animals and their courage was admired. They were also symbolic of wealth, since in ancient times only the wealthy could afford to eat pork. The pig’s high level of fertility, with many litters of piglets per sow, is a symbol of a happy family and is associated with luck. Chen himself visited a sow that had delivered 30 piglets! If Western tradition portrays the pig as a voracious, gluttonous, dirty, lazy, hypersexual and stupid animal, it is nevertheless a creature that is satisfied and happy. Scientific studies have proven its intelligence. For Chen, this animal is equated with speed. Through its constant feeding, it takes a pig just two months to attain maturity and be killed ready for consumption. Paradoxically, its accelerated development is a process that only quickens the animal’s own end. This is its fate. Through his art, Chen draws a comparison between the pig’s rapid growth and the speed of development and productivity of contemporary China. 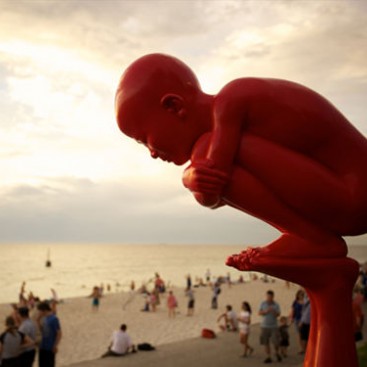 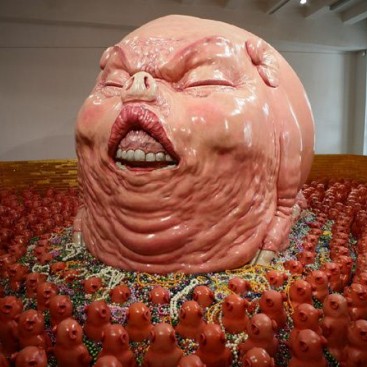 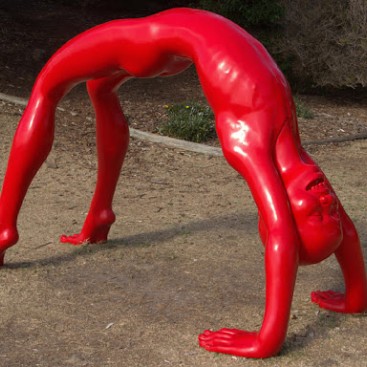 His king-like pig bloats with abundance and gluttony, obscene obesity and Rabelaisian triumph, sick with greed. Surrounded by creatures covered in excessive amounts of makeup, he burps and farts the nauseating fumes of lawless vanity into the world. His vulgarity and bestial nature portray the vices of the world in which he wallows. He reigns over small obedient litters, arranged in rows as in a military parade, consuming his droppings in a grotesque feast. Capitalism where everything is on the menu, a funfair of vanities, the Sodom and Gomorrah of the East draw us in a daze towards a never-ending banquet, where the consumer is never satisfied and continues to guzzle his rich food until death. He participates in this absurd cycle that leads him relentlessly to his downfall.

Is it not the artist's role to protect the masses from the dangers of this deception of abundance, that is widely accepted by society ?

Chen is a gaudy prophet who uses "bad taste" to cry out for outrage and indignation. Like Joseph Beuys, he advocates a “Social Art” intended to awaken the masses to the fact that a tree being planted is worth more than narcissistic objects hidden in the dark rooms of museums for the eyes of connoisseurs.

Through his early ‘Red Boys’ sculptures (1984), standing on the beach, between the sea spray and sunrises, we can once more witness the sweet simplicity of an innocent time. These giant boys - naked, laughing, and red (a lucky colour) - echo our shared dream of youth and utopian prosperity.

This innocent world has changed and become corrupt, irretrievably tainted by the rapid growth of a country that was not prepared for the storms of rampant urbanization, Western corruptions and greedy markets. Its frail boys have transformed into slaves who cry out in silent rage.

Chen’s work does not explicitly speak out against politics like that of many exiled artists. Rather, like a 17th-century fairground man with a pig as his harlequin, he conveys and caricatures the image of a rapidly-changing society in his grotesque fables. His references to pop culture, to the material language of fads and trends that is now accepted by all as part of the tradition of communication, make him an easily comprehensible messenger, even if some of his allegories contain more cryptic hidden messages.

The wind of the West has blown through Pop Art and their followers from Warhol to Koons with a more American orientation or idols or the odyssey of false paradises do not have the same faces, but these influences remain foreign to the internal history of his country.